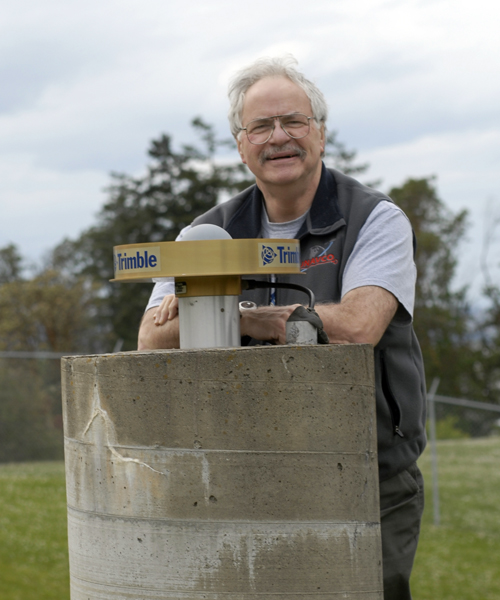 The most interesting aspects of my job have been the constant changes brought about by technological developments and the fact that answering one research question usually gives rise to ten new research questions.
Q&A with Herb Dragert 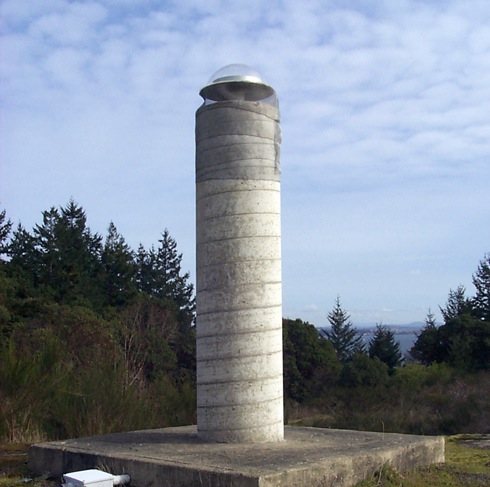 ALBH is located on Vancouver Island in British Columbia.

ALBH is located on Vancouver Island in British Columbia. 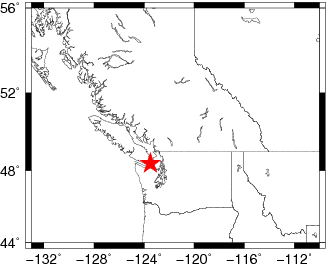 How did you become a scientist/engineer?
In high school, I had a strong interest in science subjects—mathematics because it presented geometric or algebraic puzzles that were fun to solve; physics and chemistry because they revealed how the world around us functioned at a more elementary level. During the first two years of my studies at the University of Toronto, I had no clear science career path in mind until I discovered geophysics via classes taught by Canadian "giants" in the Earth sciences such as George Garland, Gordon West, and Tuzo Wilson. While still an undergraduate, I then began spending summers carrying out geophysical surveys in remote wilderness areas searching for mineral deposits, which more or less cinched my career as a geophysicist. After graduation, my curiosity in learning more about how geological and geophysical processes worked led me to take up post-graduate studies and finally a career in scientific research.
What is your job like?
My job has a satisfying mix of time spent outdoors gathering data, time spent indoors processing and interpreting data, and travelling to visit scientists in other institutions or at conferences to share research findings. The most interesting aspects of my job have been the constant changes brought about by technological developments and the fact that answering one research question usually gives rise to ten new research questions. Specifically, my research centers on crustal deformation studies and investigates what small, subtle surface motions can tell us about tectonic processes and regional seismic hazard. Forty years ago we relied on long-term tide-gauge records and labor-intensive ground surveys to reveal crustal motions. Today my job involves using satellite technology to monitor crustal deformation with ever-improving precision.

One totally unexpected finding was our discovery of slow slip in the Cascadia Subduction Zone. Using the continuous observations from a network of GPS sites we were able to resolve repeated episodes of aseismic slip on the deeper plate-subduction interface. This discovery shed light on an unsuspected plate-motion process and also provided an explanation for the noise-like, low-frequency seismic tremors that had puzzled Canadian seismologists for several decades.
What are you hoping to learn from your research?
By using new technologies and their improved resolution of crustal deformation, I hope to gain a better understanding of the structure and dynamics of the Cascadia Subduction Zone and the regional seismic hazard. This now also includes a better understanding of the physical processes involved in Episodic Tremor and Slip (ETS) and determining possible spatial and temporal relationships of ETS with large regional earthquakes. Another way of stating this is with the questions: "Are large earthquakes more or less likely to happen near areas where ETS occurs?" and "Can an episode of ETS trigger a huge subduction thrust earthquake?"

ALBH was one the very first continuously operating GPS sites to be installed in the world. It is located in the Cascadia Subduction Zone. Here a small tectonic plate called the Juan de Fuca plate subducts beneath the North American plate (Figure 1). Instead of moving freely past each other, the two stick together in what is called a "locked" zone. When this locked zone breaks, every 500 to 600 years or so, a massive earthquake rocks the region, causing the land along the coast to sink and move seaward. The last great earthquake in this region was in 1700.

The GPS data from ALBH were vital to the discovery of what is known as episodic tremor and slip. ALBH continues to be key in on-going investigations of this phenomenon. In a transformative paper published in 2001, scientists at the Pacific Geoscience Centre pointed out that instead of moving steadily in one direction, as we would expect, the GPS sites moved in the opposite direction for several weeks (Figure 2) This observation was subsequently discovered to happen every 14-15 months (Figure 3). A follow-on paper showed that these slip episodes were accompanied by seismic tremor. 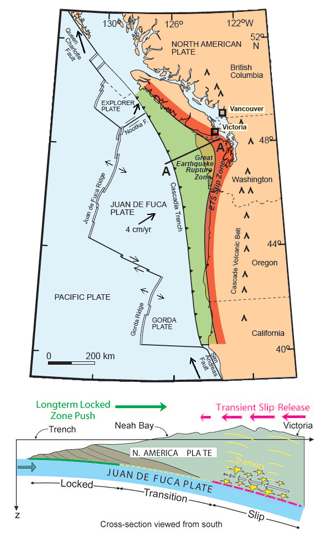 Figure 1. Top: the Cascadia Subduction Zone. Below: Side view of the Juan de Fuca subducting plate. The downgoing Juan de Fuca plate moves eastward, but is stuck to the North American plate along the locked zone.

Figure 1. Top: the Cascadia Subduction Zone. Below: Side view of the Juan de Fuca subducti... 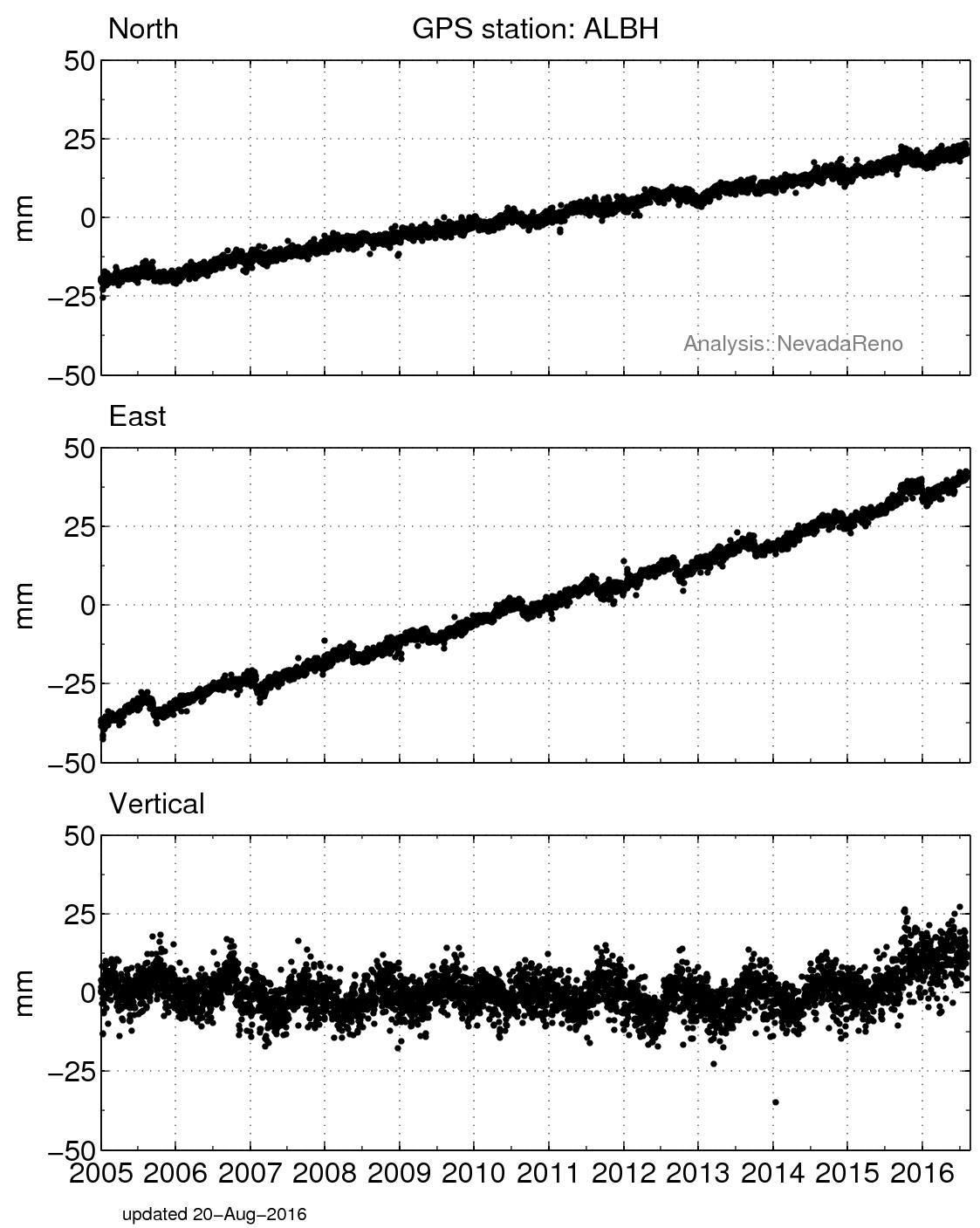 Figure 4. Position changes for ALBH in a North American fixed reference frame. (For help i... 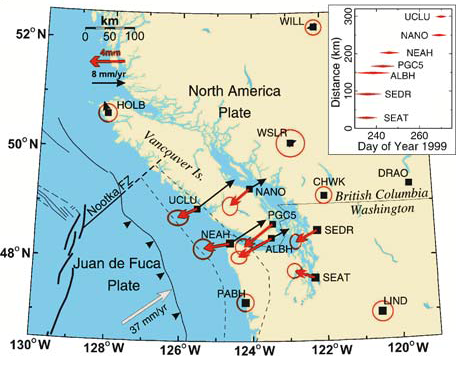 Figure 2. Black vectors are long-term velocities relative to stable North America and red vectors are anomalous displacements during the 1999 slow slip event. The inset shows relative timing of the events. 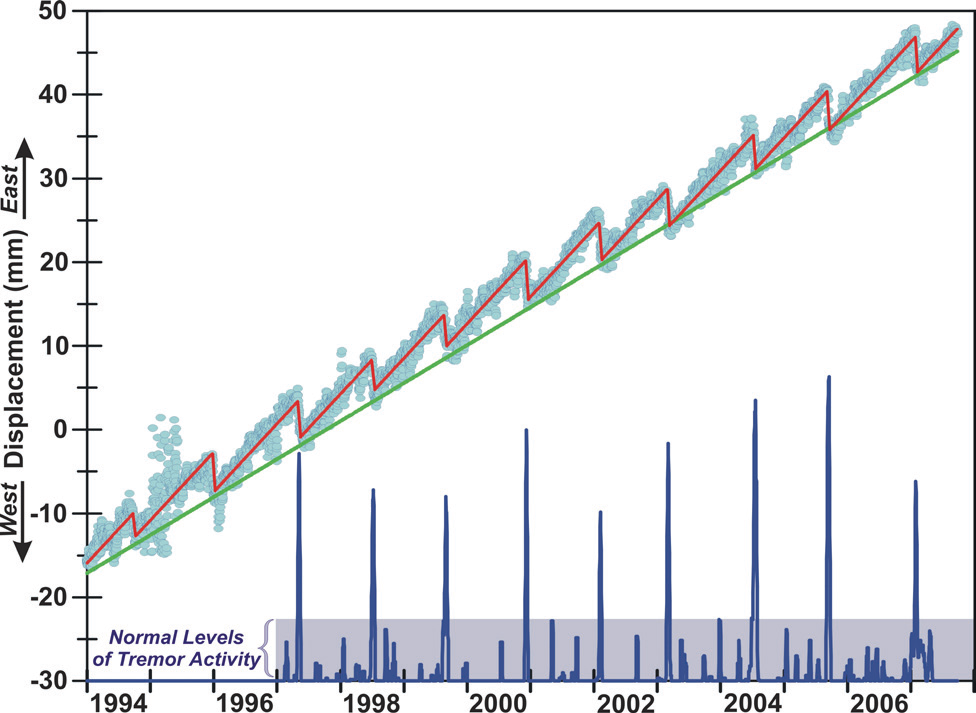 Figure 3. Top: day-by-day changes in the location of ALBH in an east-west direction. The long-term upward trend (green line) shows that, on average, this site moves east at a rate of five millimeters per year. The red saw-tooth line shows that for about 15 months, the GPS site moves more rapidly east than the long-term average. However, at the end of each 15-month period, the site moves west about four millimeters over a period of two weeks. These temporary reversals or breaks mark episodic tremor and slip events. Below: Tremor activity.

Figure 3. Top: day-by-day changes in the location of ALBH in an east-west direction. The l...