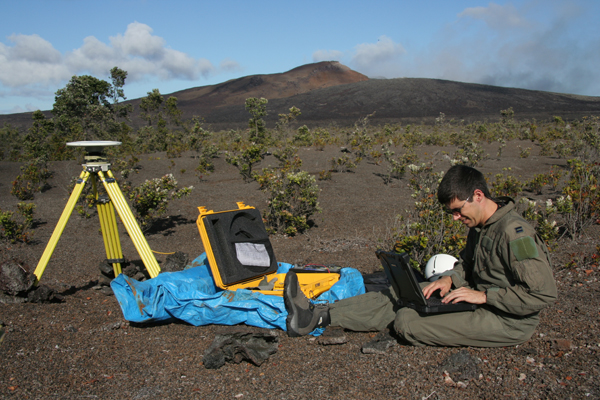 Kilauea Volcano is always changing, almost on a daily basis. The work is never boring.
Q&A with Michael Poland 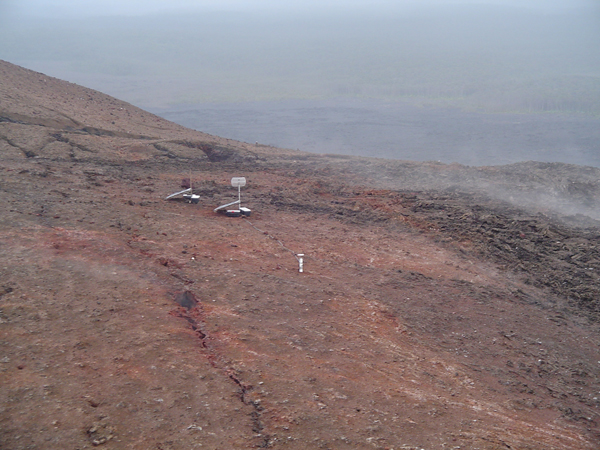 Site PUOC is anchored to the flank of Puu Oo, an active lava vent on Kilauea Volcano in Hawaii. Click on the photograph to enlarge it to see just how close the instrument is to an open fissure.

Site PUOC is anchored to the flank of Puu Oo, an active lava vent on Kilauea Volca... 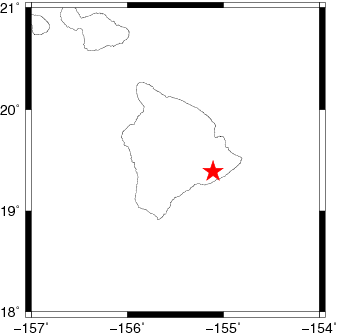 How did you become a scientist/engineer?
I think my first interest in volcanoes started in 1980. I was 4 years old when Mount St. Helens erupted, and I remember being glued to the television watching updates about the event. As I went through grade school, I was always interested in reading and learning more about volcanoes (I even remember ordering the book "Mount St. Helens: Big Blast" from the scholastic reader order forms they used to hand out in grade school). My father and I also took camping trips to some of the big mountains in northern California, like Lassen Peak and Mount Shasta, and we explored the geology of those areas.

While interesting, I never seriously thought about becoming a geologist - I always said that I couldn't see myself dusting off rocks in the desert. The summer before I started college, however, I heard a radio interview by a UC Davis professor about the movie Jurassic Park. The professor sounded really interesting and, since I was going to attend UC Davis, I enrolled in the intro geology class he was teaching during my first quarter. That great class led me to enroll in more geology classes, and before I knew it I was a geology major. One professor took me under his wing and asked me what part of geology I wanted to focus on, and I said planetary. He shook his head and said, "You realize that there are no jobs in that field. What else interests you?" I said volcanology. He replied, "Not many jobs there either, but let's see what we can do."

I did a lot of work with professors at UC Davis in the years I was there, including some undergrad research projects in northern California and as a field assistant in Hawaii. I was able to go to grad school at Arizona State University, which I chose specifically because of one professor who was an expert in volcanology. I told him my goal was to work at the U.S. Geological Survey's Cascades Volcano Observatory (CVO). Mount St. Helens was still on my mind. Some of the research I did in Arizona was in collaboration with CVO scientists, and one of them offered me a post-doc to work on interferometric synthetic aperture radar (InSAR—a technique that measures ground deformation from space) after I graduated from Arizona State. After 3 years at CVO, a permanent position opened at the Hawaiian Volcano Observatory for a deformation specialist. I was offered that job and have been working in Hawaii since 2005. It has been a spectacular posting.

If I could offer any advice to young students—who aspire to careers in volcanology or anything else—it would be to put yourself in a position to take advantage of opportunities that will arise in the future. In a real sense, you create your own luck. When an opportunity arises, you want to be poised to take advantage of it, be it a dream job, a chance to add to your skills, a new learning opportunity, or anything else. Don't wait for "luck" to find you. Make your own luck.
What is your job like?
I've felt strong earthquakes (up to M6.7), seen several fissure eruptions, witnessed lava fountaining, and stood on the rim of the largest lava lake in the world, among many other unique experiences. Perhaps the best part about Hawaii, and Kilauea in particular, is that it is so dynamic. The volcano is always changing, almost on a daily basis. The work is never boring.
What are you hoping to learn from your research?
While in Hawaii, I have become interested in tracking the supply of magma from the Earth's interior to the volcanoes, mapping the underground magma plumbing system beneath Kilauea, and studying how the gravitational field changes due to volcanic activity.

Kilauea Volcano, on the Island of Hawaii, is one of the most active volcanoes in the world. The volcano has been erupting since 1983. PUOC is the key site on Puu Oo (Pooh-ooh Oh-oh)—the vent on Kilauea's east rift zone that has been active since January of 1983.

Monitoring ground motion, or deformation, can tell us whether:
The station is right on the north rim of the cone, and responds with sudden shifts (displacements) to changes in volcanic activity. Some of the most spectacular events occurred in 2007 and 2011.

2007
In June of 2007, Puu Oo collapsed as magma withdrew from beneath the cone to feed an intrusion and eruption closer to the summit of Kilauea.

One month later, after much of Puu Oo crater had refilled, a new eruption occurred on the east flank of Puu Oo. This became the main location of eruptive activity for the next 3.5 years.

Both the June and July events were well-recorded by the PUOC GPS station. The June event featured motion towards Puu Oo crater, while the station moved away from Puu Oo's east flank during the July event (as the east part of the cone inflated due to the new eruption).

In September, a new eruptive vent formed on the east side of Puu Oo.

The March and August events featured deflationary deformation, with the GPS station moving towards the crater, while the station moved away from the new eruption site during the September event. 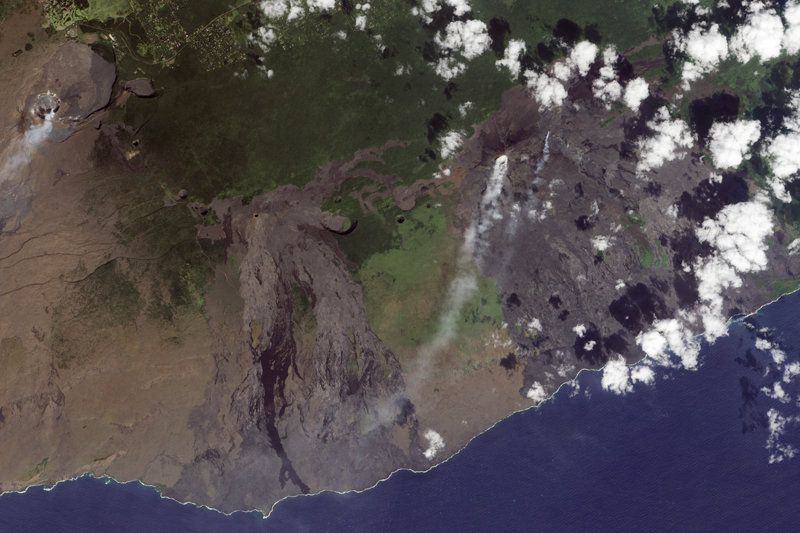 Figure 1. This image was acquired by the Advanced Land Imager on NASA's Earth Observing-1 satellite on December 11, 2009. You can see the east rift zone from Kilauea caldera, in the upper left, to Puu Oo, with the largest steam plume. Can you trace the rift zone? What are the ovals? What is the green? What is the gray and black? (Credit: NASA Earth Observatory)

Figure 1. This image was acquired by the Advanced Land Imager on NASA's Earth Observing-1 ... 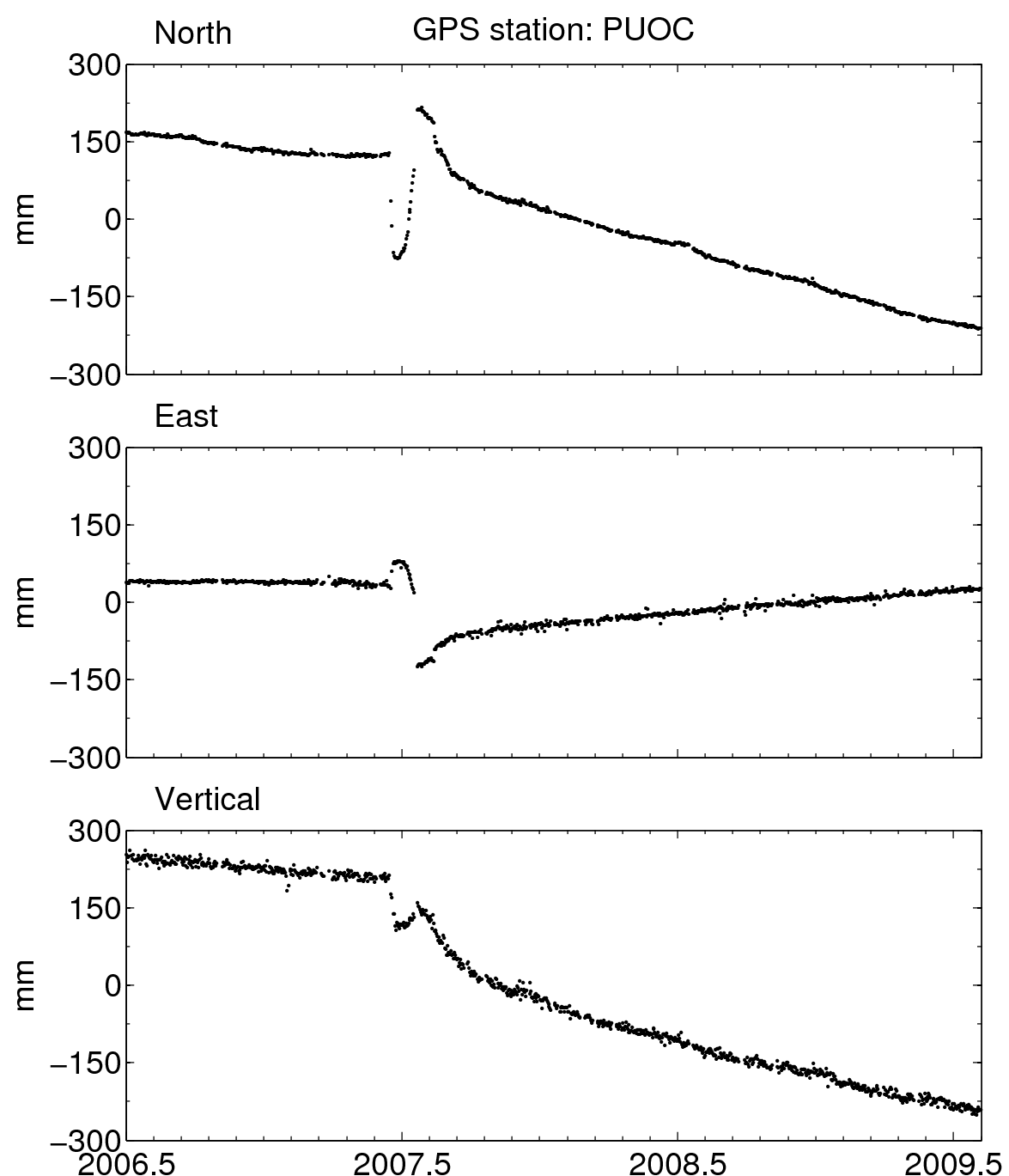 Figure 3. This graph shows the motion of PUOC from June 10, 2006 to August 20, 2009. What direction is the site moving before the June 2007 eruption? (North, south, east, west, or something in between?) What was the displacement during the June 10 eruption? (How much did it move north or south, east or west, and up or down?) What direction did the site move between the June and July eruptions? (For help interpreting the graphs, see the GPS Data page.) 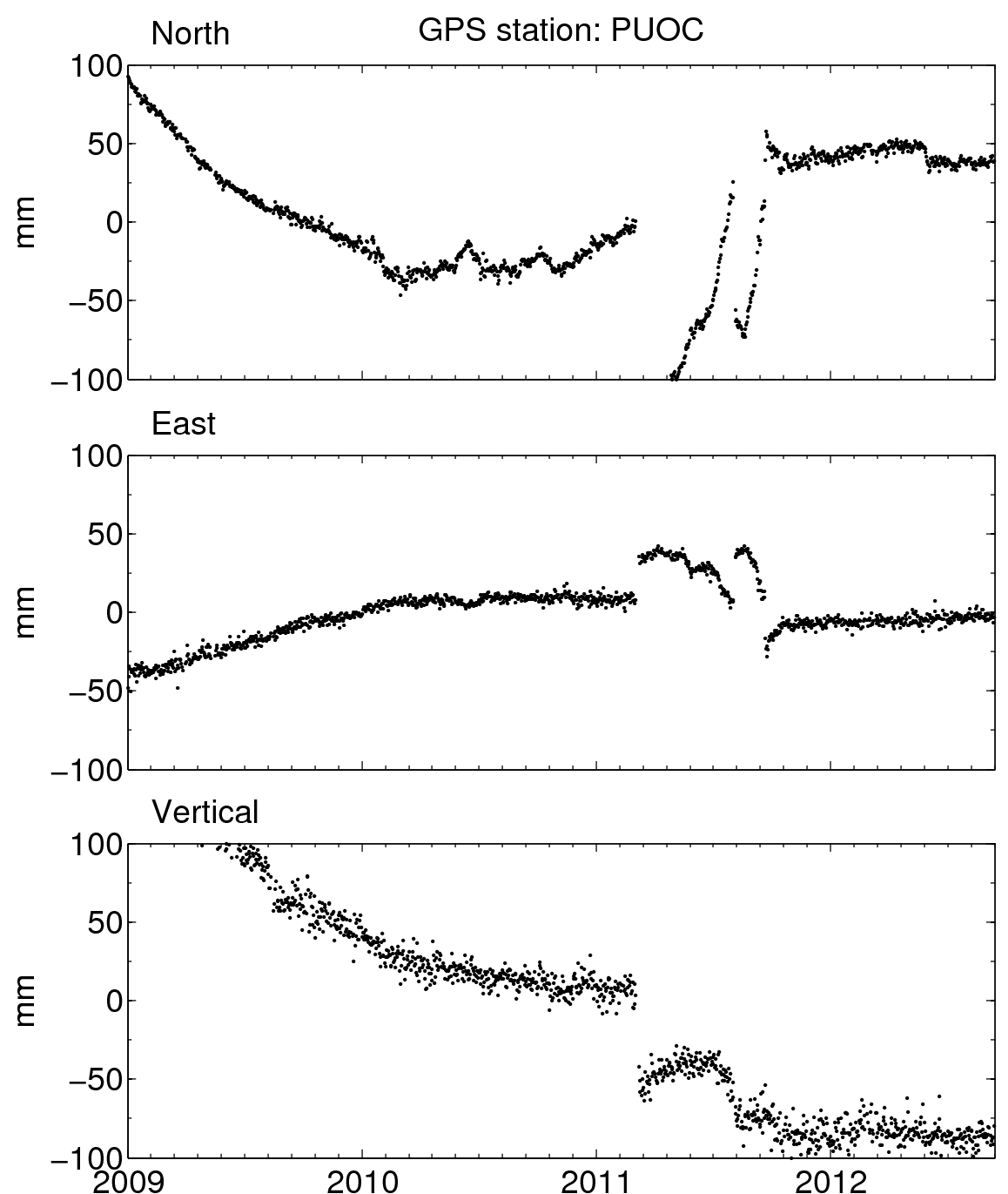 Figure 5. This graph shows the motion of PUOC from 2009 to 2012. What direction did the site move during the events in 2011? PUOC is on the north rim of the Puu Oo cone. Did it move toward the crater, or away from the crater? Up or down? 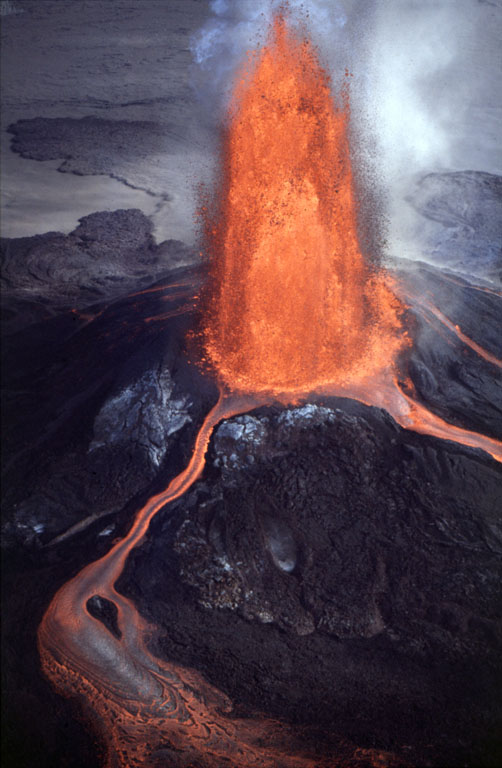 Figure 2. In the beginning of the eruption, lava fountaining was common at Puu Oo. This photograph was taken on July 28, 1984. (Photo: USGS)

Figure 2. In the beginning of the eruption, lava fountaining was common at Puu Oo. This ... 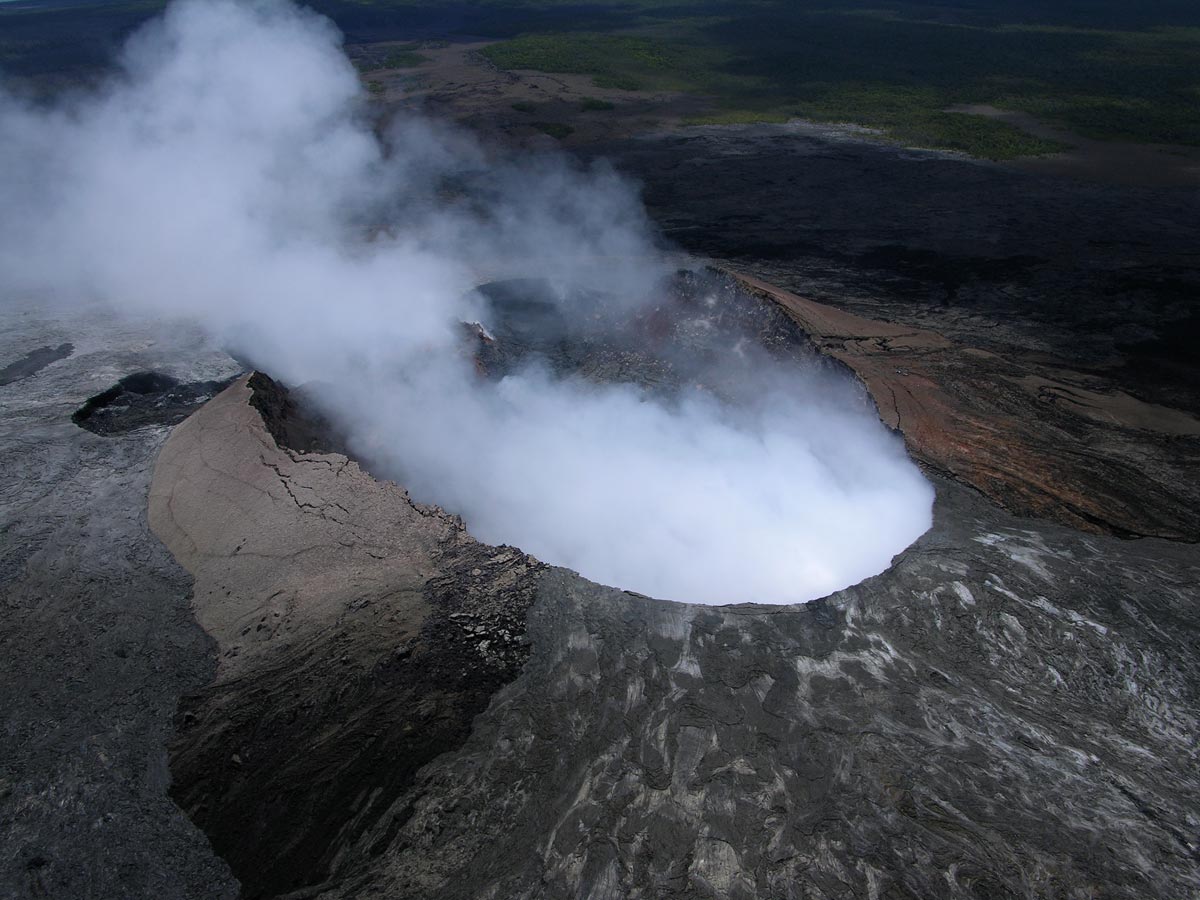 Figure 4. Puu Oo crater on August 7, 2007. Can you find site PUOC? It's a tough one! (Hint: look at the fissures and compare them to what you see in the site photo at the top of this page. You may be able to just make out site PUOC as a white dot. It's up high on the cone, on the right-hand side of the photo!) (Photo: USGS) 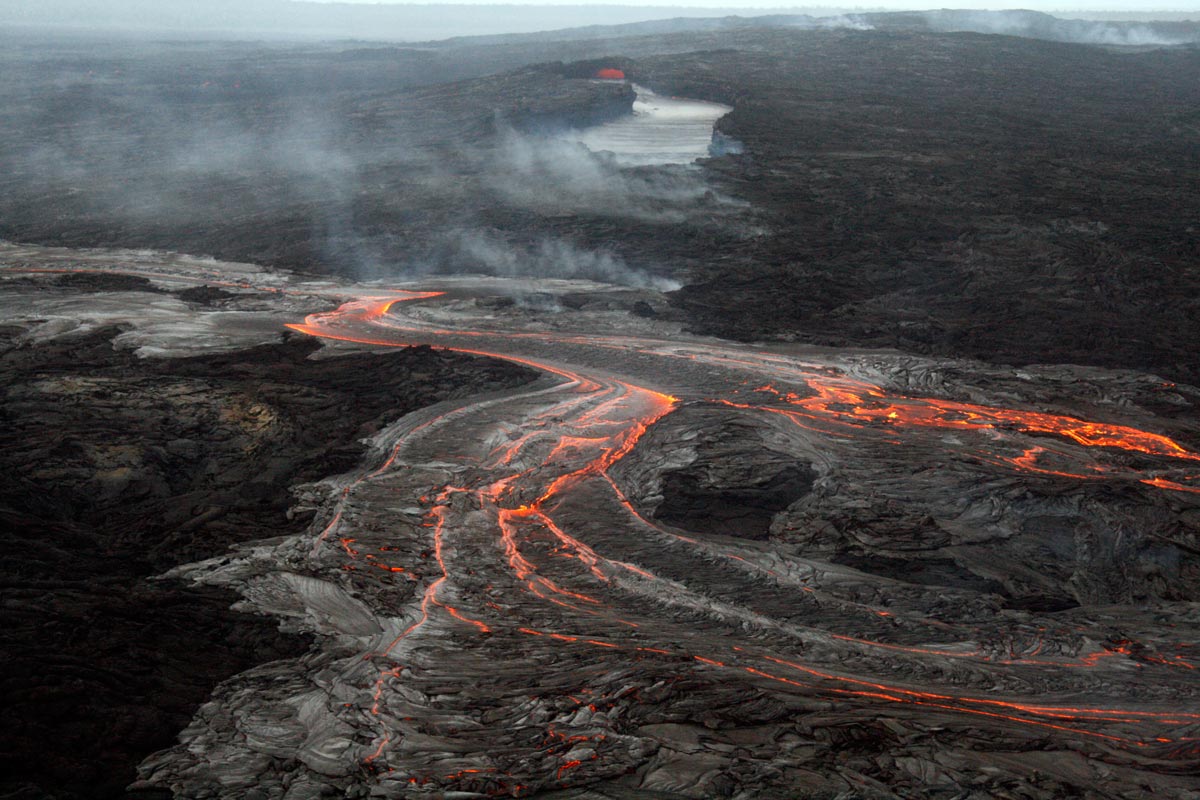 Figure 6. Breakout of lava on Thanksgiving Eve, November 21, 2007, from the fissure east of Puu Oo. The open channel system is visible in the background. Since the eruption started in 1983, more than 200 homes have been destroyed by lava. (Photo: USGS)