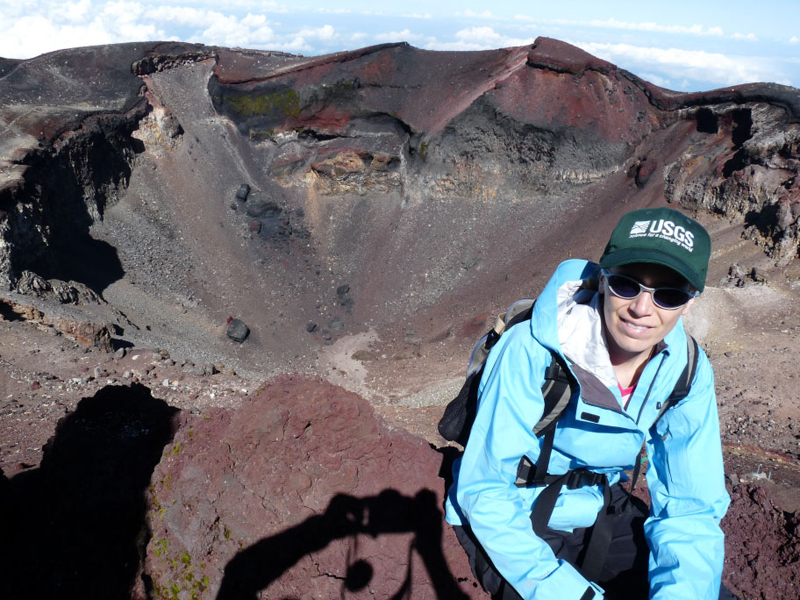 It was very important to me for my work to have direct relevance to the public at large.
Q&A with Jessica Murray 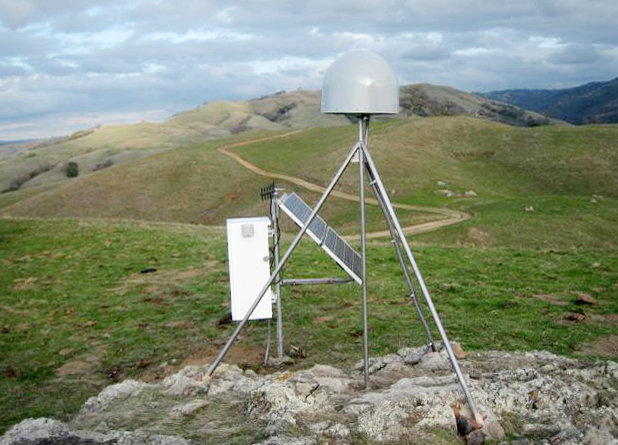 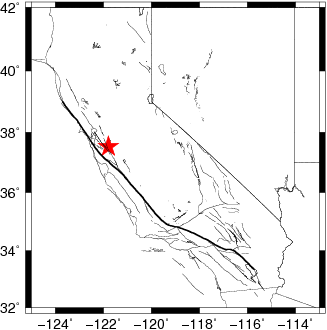 How did you become a scientist/engineer?
My father is a geologist, so I was aware of Earth science as a profession from an early age. However, it was not until I began taking geology courses in college that I became hooked. Learning about the physical processes that lead to what we observe in nature, developing and testing hypotheses, and having the opportunity to do field work in interesting places throughout the world all attracted me to a career in Earth science. It was also very important to me for my work to have direct relevance to the public at large, and this led me to choose a graduate school program in which I specialized in studying the way the Earth's crust deforms due to earthquake faults.
What is your job like?
I am a Research Geophysicist at the U.S. Geological Survey where I lead a group of scientists and staff who collect, process, and interpret data from GPS instruments as well as strainmeters and creepmeters. We use these data in seismic hazard assessment, earthquake response activities, and basic research. My research includes estimating the rates at which strain accumulates in the Earth's crust during the time between earthquakes, investigating motion that occurs on faults due to earthquakes and other processes, and developing ways to monitor continuously recorded GPS data for anomalous changes that may be related to fault movement. I communicate the results of this work through oral presentations and written publications. In addition to research, I plan the overall goals for my group; work with group members to figure out the best strategies for achieving them; assess the financial and personnel resources needed; and develop collaborations with universities, other government agencies, and the private sector to meet these goals.
What are you hoping to learn from your research?
GPS can record motion of the Earth's crust that is too slow to generate seismic waves and therefore can't be seen with seismometers. In this way GPS gives us a window into the rate of relative movement of two sides of a fault, called the slip rate, that must be accommodated over time. Using GPS we can also study processes that cause a fault to move slowly (at rates of mm or cm/yr). This can happen in response to an earthquake or spontaneously during the time between earthquakes; some faults move slowly all the time. GPS measurements of crustal motion provide important data for developing more accurate seismic hazard assessments and may eventually help us to better understand the conditions under which faults move quickly in an earthquake causing catastrophic damage versus gradually in a way that releases strain without shaking that can be felt.

Station P227 is located about 5 km northeast of the Calaveras Fault, and about 65 km southeast of San Francisco (Figure 1). A plate boundary is generally made up of many faults covering a broad zone that can be 100s of kilometers wide. In the San Francisco Bay Area, there are three major faults (the San Andreas, Hayward, and Calaveras) in addition to several smaller faults. There are even faults in eastern California, Nevada, and Utah that accommodate some of the relative motion between the Pacific and North American plates.

Most of the time, station P227 moves steadily relative to North America because it is within this plate boundary zone (Figures 1 and 2). However, on October 31, 2007, a Mw 5.4 earthquake occurred on the Calaveras Fault. An earthquake of this magnitude causes very small movements of the Earth's surface, but P227 and stations near it were in the right place at the right time to record it!

P227 jumped to the southeast due to fault motion (called coseismic fault slip) at the moment the earthquake occurred (Figures 3 and 4). Then the station continued to move slowly over the next couple of months because of continued fault motion called afterslip (Figures 3 and 5). Usually the amount of afterslip is small compared to the amount of fault slip during the earthquake, but in this case the GPS data show that the amounts were similar. Scientists are still working to understand what controls the amount of afterslip.

Using the GPS data, my colleagues and I estimated the location and amount of fault slip and how much this slip increased or decreased stress on nearby faults. Understanding how stress changes due to one earthquake might influence the likelihood of a future earthquake is an area of active research. 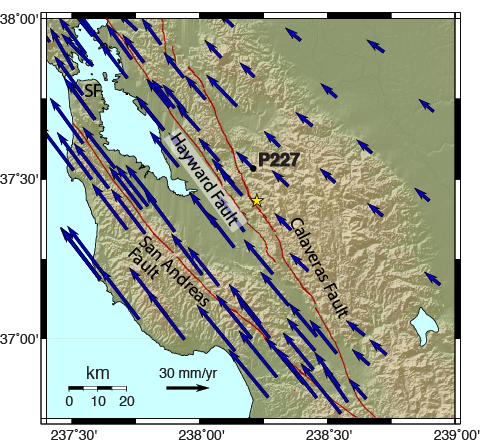 Figure 1. Map of the San Francisco Bay Area. The three major faults are shown by the red lines. Each blue arrow shows the velocity of a GPS station relative to the center of the U.S., which is on the North American plate outside the plate boundary zone. The black arrow indicates the velocity scale. Station P227 is shown with the black dot, and the yellow star marks the epicenter of the October 31, 2007 Mw 5.4 earthquake. SF marks the location of the city of San Francisco.

Figure 1. Map of the San Francisco Bay Area. The three major faults are shown by the red ... 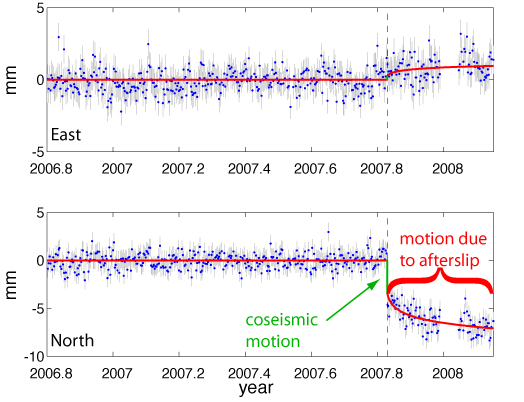 Figure 3. This figure again shows the position of P227 over time, but the linear trend has been removed from the data to make it easier to see the changes that happened at the time of the October 31, 2007 earthquake and in the four months following it. The green lines show the offset due to the coseismic fault slip, and the portion of the time series after the earthquake shows how the afterslip caused continued motion at P227. As you can see, the station moved much more in the north-south direction than the east-west.

Figure 3. This figure again shows the position of P227 over time, but the linear trend has... 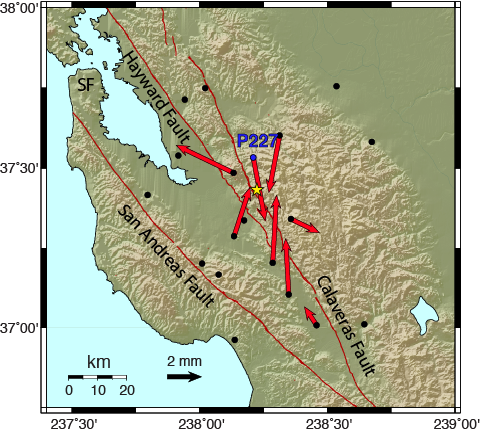 Figure 5. This map shows how much the GPS stations near the epicenter moved due to afterslip during the four months following the earthquake. The relative magnitudes of displacement among these stations is different from the coseismic displacement shown in Figure 5, but the largest afterslip displacement at any station is still about 4 mm.

Figure 5. This map shows how much the GPS stations near the epicenter moved due to aftersl... 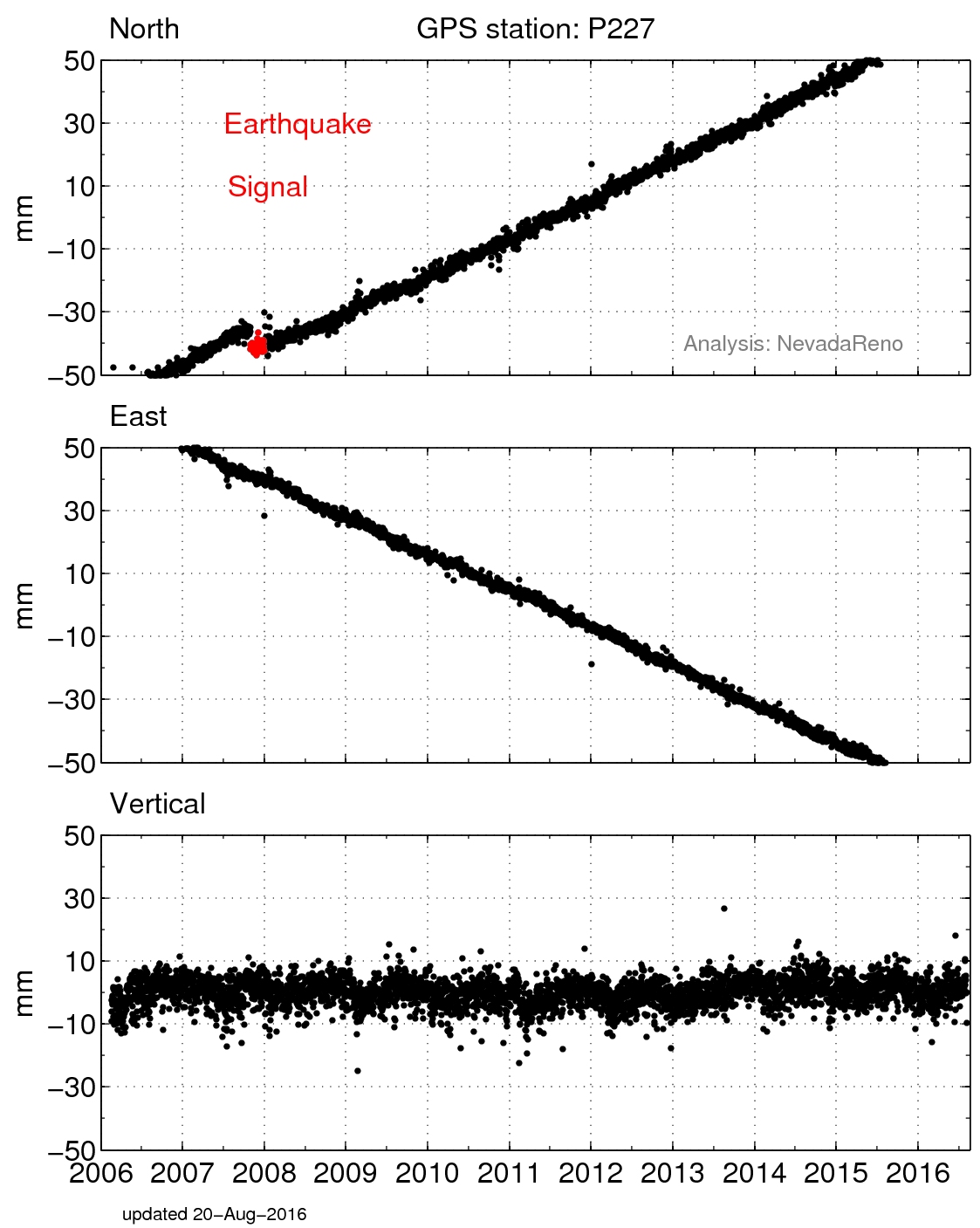 Figure 2. This figure shows the north, east, and vertical positions of station P227 since 2006 relative to the North American plate. Most of this time P227 has moved steadily, as is shown by the nearly linear change in position with time. (For help interpreting the graphs, see the GPS Data page.)

Figure 2. This figure shows the north, east, and vertical positions of station P227 since ... 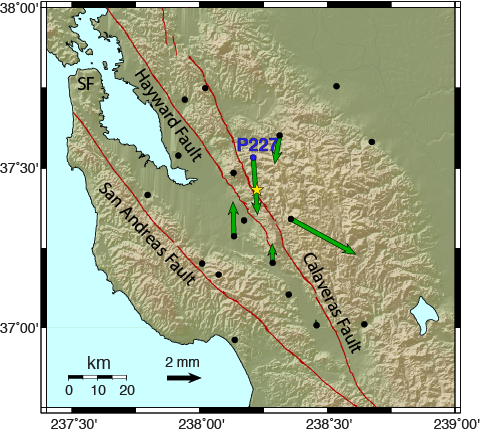 Figure 4. This map shows the direction and amount that GPS stations near the epicenter moved due to the coseismic fault slip (i.e., during the earthquake). The vector scale shows that the largest displacement at any station was only about 4 mm.

Figure 4. This map shows the direction and amount that GPS stations near the epicenter mov...