I became a geophysicist because I wanted to combine my interests in computer science, data analysis and the outdoors.
Q&A with Ronni Grapenthin 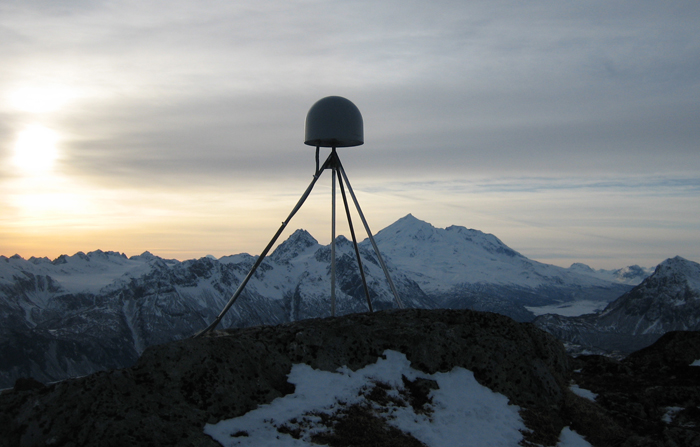 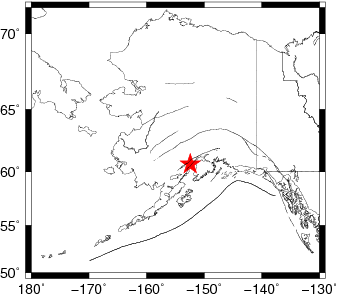 How did you become a scientist/engineer?
I was interested in nature and exploring as a kid, but never thought about becoming a scientist. This was mainly because I had no idea what scientists do. Even as a college student in computer science I didn't think of becoming a scientist until I got actively involved in research. That happened during an exchange semester in Iceland where I began studying crustal deformation and understood that seasonal snow deposits on Icelandic ice caps result in strong seasonal signals in GPS time series. At that point I understood what scientists do: create new knowledge, find new stuff, solve puzzles—and I was hooked.

I became a geophysicist because I wanted to combine my interests in computer science, data analysis and the outdoors.
What is your job like?
During my time as a graduate student in Alaska I got to travel to many places in the state as well as several times to Kamchatka, Russia, to do field work. Once the instruments are deployed, the work consists of data collection (either occasional site visits, or remote downloads), and mostly data processing and analysis: We comb through the data, try to find interesting signals from which we hope to understand something about the Earth. Occasionally a volcano erupts, which in the case of Redoubt 2009 got me involved in the excitement and produced a significant amount of the data I used in my dissertation.
What are you hoping to learn from your research?
In geodetic volcano monitoring, we try to link surface deformation to changes of a magma reservoir at depth. We are most interested in the geometry, depth, and volume changes of the reservoirs, as this will teach us something about possible future scenarios. From AC17 we learned that magma accumulated deep enough under Redoubt before the 2009 eruption that it shows up in the records of AC17. We hope this will be helpful knowledge during future eruptions.

AC17 was installed to measure subduction zone deformation, but the station also happens to be just 28 km northeast of the summit of Mount Redoubt. Redoubt erupted from March 23 to about mid June in 2009. AC17 was the only GPS instrument near the volcano recording continuously during the months prior to the eruption.

Although scientists didn't recognize it at the time, the station's data reveals subtle motion outward from the volcano beginning as early as May 2008, over one year before the eruption. At the beginning of this period, there was no associated earthquake activity, making GPS the first instrumentation to detect activity at the volcano.

Looking closely at the satellite data provided a possible new way to use GPS in volcano monitoring. When we looked at the records of the closer GPS stations, which were installed just prior to the eruption, we found evidence of ash plumes in the data. For example, when we plot site RVBM's position over the course of the day, we see that it seems to move significantly during the explosions from 14:00 to 14:40 UTC (Figure 5). Why does the site move? It turns out that it doesn't. We found that the plume affects the GPS radio signal, effectively slowing it down and making the site look like it's moving. In the future we hope to use this in near real time volcano monitoring. 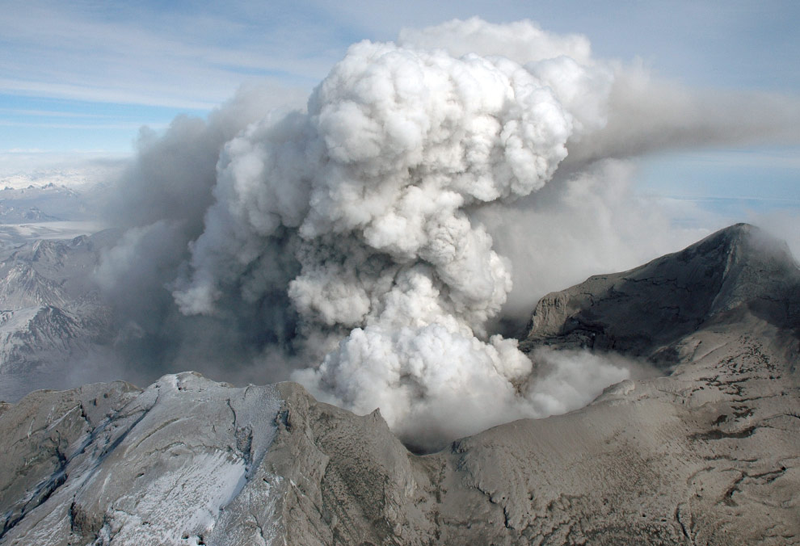 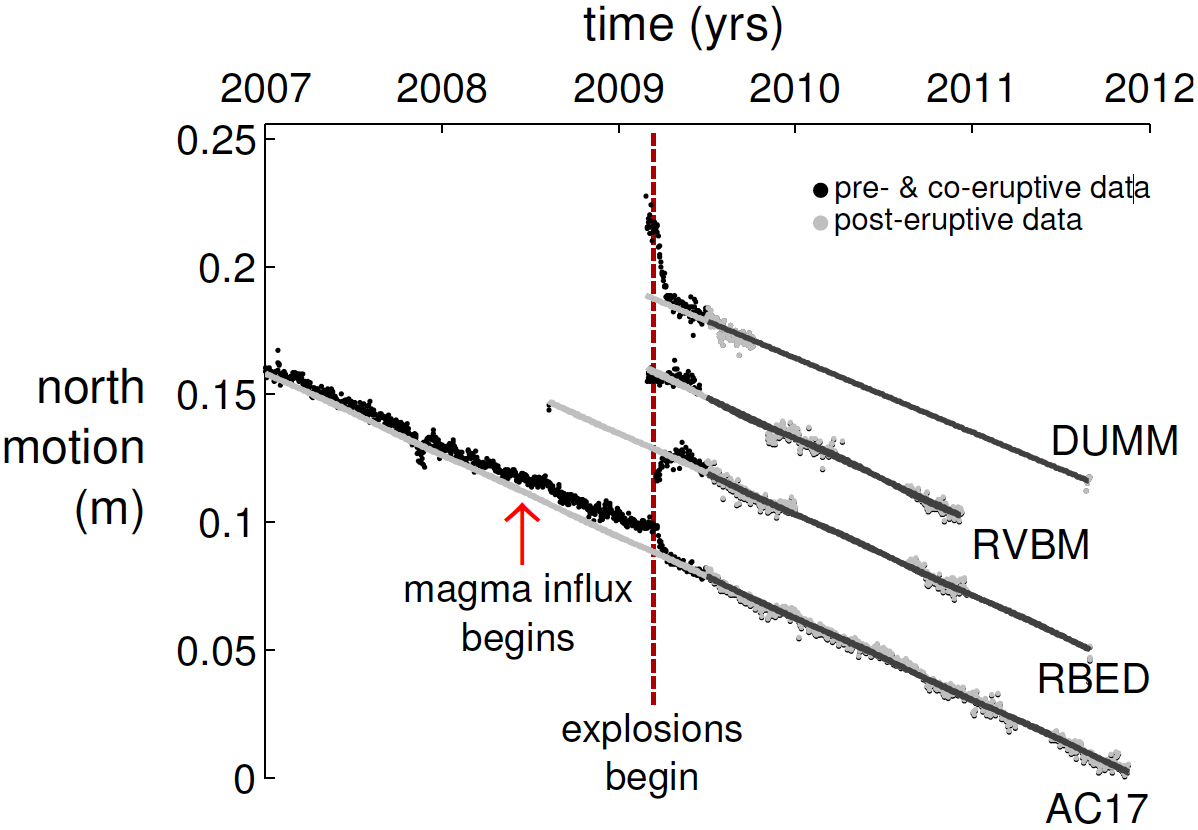 Figure 3. North motion of continuous GPS stations at Redoubt volcano from 2007-2012 (in ITRF 2008). Sites DUMM, RVBM, and RBED were operating only for the time of unrest. By drawing long-term trends based on motion after the eruption, we can see a subtle deviation in AV17 beginning about May 2008. Precursory seismicity was detected in December 2008. With the onset of explosions at the end of March 2009, this motion reverses. We can also see that, while the post-eruptive fitted line (dark grey) goes through the points from mid 2009-2012, the light grey line is below the dots from 2007-May 2008. This means that more material came out than what went in.

Figure 5. Position changes for site RVBM on April 4, 2009. The black line is the original calculation, using all available satellites. Note the spike from 14:00 to 14:40 GPS time. Is it motion? When researchers removed satellite 10 from the data processing (blue line), the spike went away. The signal from satellite 10 was delayed travelling through the volcano's plume. Scientists may be able to use this information to remotely and quickly detect ash plumes.

Figure 4. Deflation during explosive eruptions from March 22, 2009 to April 4, 2009. Blue arrows show horizontal motion and red arrows show vertical motion during that time period. We can see clear subsidence (deflation) as well as horizontal motion towards the volcano. The blue vectors point toward the source of motion directly under Redoubt Volcano. This helps scientist map out where the magma chamber is.